Buy Tickets
Get an ACTPass

James, an Argentine veteran of the Malvinas/Falklands War, wakes one morning to a big surprise in his living room: two big black bags containing ten million dollars. Determined to turn his life around, James embarks on an adventure from Seattle to South America. But is he willing to face the ghosts of his past in order to transform his future?

Based on an overlooked but deeply significant moment in Latin American history, this new fast-paced drama by Julieta Vitullo draws on music, movement, and magical realism to craft a universal story about the devastating effects of violence and the long and winding road to healing and redemption.

Two Big Black Bags will be presented as a scripts-in-hand, workshop production in collaboration with eSe Teatro, Parley, and ACTLab. The play will be presented in English with some spoken Spanish and music in Spanish.

A Personal Statement from the Playwright, Julieta Vitullo

I was six when the Argentine military decided to appeal to an old anti-colonial cause to incite patriotic feelings and regain popularity. The U.S.-backed military dictatorship had been in power since 1976, having left 30,000 people “disappeared.” On April 2nd, 1982 the armed forces composed mainly of young conscripted soldiers with no training, landed on the Malvinas/Falklands, an archipelago 370 miles off of Patagonia that had been occupied by the British since 1833. Our teacher forced us to support “our troops” and sing against Margaret Thatcher. I felt conflicted knowing the military had killed one of my parents’ friends, and didn’t like that the conscripted soldiers had to fight while the professionals stayed home.

Two decades later I was studying at Rutgers and had to choose a dissertation topic for my PhD in Latin American literature. The Falklands War crystallized as the most important event to have shaped my political worldview. It was a widely overlooked topic and little had been written about the literature produced in its aftermath. In the next few years, I traveled to the islands, finished my dissertation, published a book on the fictions of the war, went to the islands again, and made the award-winning documentary film La forma exacta de las islas, based on a traumatic experience I underwent following my first trip. By the time the film was released, I thought I was done with the topic.

However, some months ago an idea popped into my head: a veteran of the Malvinas who is struggling with trauma and addiction awakes to two big black bags in his living room. I thought of this for days, trying to figure out the connection between the bags, which my imagination had filled with ten million dollars, and the trauma of the war. I didn’t think I had anything else to say about the Malvinas war, and yet there I was, writing my way into a play about it. I felt a freedom I hadn’t experienced while dealing with the topic from a theoretical or autobiographical perspective. Suddenly, I had no restraints: my veteran was called James; he was an Argentine who grew up speaking English with his Irish grandma; during the war, English saved his life; he suffered a split following the trauma and was fighting with his alter ego; he met his wife during the 9/11 attacks in New York; the war memories had wrecked his mental health and he was throwing his life away; he ached to return to his wife and daughters. My plot and characters provided me with a backdrop of themes I was familiar with (terrorism, colonization, oppression, identity and language) but now I could exercise and unrestricted creative freedom to impact my audience through a live, three-dimensional and playful theatrical experience.

As a citizen of a country that carries its traumas on its collective sleeve, and an immigrant who arrived in the U.S. right before 9/11 (witnessing the collapse of the towers and the breakdown of the American psyche), I’m amazed by U.S. Americans’ ability to normalize the idea of perpetual war. There can never be too many plays about the devastating effects of war, and there can always be more stories to learn about cultures we have little knowledge of.

The 1982 war between Argentina and Great Britain for sovereignty over a group of islands located 480 miles northeast of Cape Horn was the only war in which Argentina participated during the twentieth century, and the only one that involved civilians. Most Argentines supported the military confrontation at this moment, just as the dictatorial, genocidal regime that started it underwent its deepest crisis of legitimacy. No previous event in Argentine history had lent itself to such consensus between the military and civil society based on a sense of national belonging and identity. Eventually, Argentina’s defeat brought with it a victory insofar as it spelled the end of the dictatorship, and paved the way for a return to democracy.

Not only did the war leave about 900 Argentines dead (more than 600 career and conscripted soldiers died in the conflict and around 300 survivors committed suicide), it also left many unresolved questions soon to be addressed by a rich corpus of novels, short stories and poems. It is the playwright’s hope that Two Big Black Bags will join that body of literature in attempting to shed light on this event.

A Note on Argentina’s Demographics

Although viewed as the most European nation of Latin America, Argentina is a country where heterogeneity has been suppressed. Authoritarian practices have attempted to eliminate differences to fulfill the ideals of modernization and global capitalism.
Now estimated at 45 million people, Argentina’s demographics are the result of waves of European immigration, notably Italians and Spanish, between the mid nineteenth and twentieth centuries, mixed with indigenous, African and Creole populations and, most recently, other South American nationalities such as Bolivians and Paraguayans. 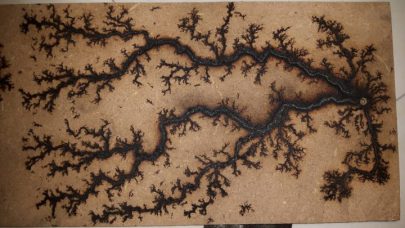 Notes About Lichtenberg Figures, Mars, and the Electric Universe Theory

Named after the German physicist who first identified them, Lichtenberg figures are branching tree-like patterns created by high voltage electrical discharge. They can occur in nature as a result of a lightning bolt, marking the surfaces affected by fern-like, fractal patterns. This can happen on the ground or on a person’s body.

Valles Marineris, a giant canyon in Mars five times longer than the Grand Canyon, takes the form of a Lichtenberg-like formation. This has led the proponents of the Electric Universe theory to argue that Mars was hit by tremendous electric forces (such as a giant plasma thunderbolt).

Electric Universe physicists go as far as to say that the scar on the face of the god Mars (the Roman version of Ares) is a mythical representation of an actual cosmic phenomenon that ancient peoples witnessed during a phase of high interplanetary electrical discharge activity.

eSe Teatro: Seattle Latinx Take Stage
Founded in 2010, eSe Teatro honors self-definition and inclusion, striving to represent all the colors in the “rainbow of brown” of our Latinidad. eSe Teatro explores language, shared history, and cultural roots, through adaptations of classics as well as new works and script development.

Parley, a Seattle Playwrights’ Group
Parley is a collective of Seattle playwrights committed to the long-term development of one another’s work. We provide a protected space in which to welcome the unguarded, authentic expression of our differences on the stage.

A limited number of standby tickets will be available at the door for each performance, pending availability. Beginning at 6:00pm, all interested patrons may write their name on a numbered waiting list at the ACT Ticket Office. A few minutes before the performance begins, a Ticket Office representative will call names from the list in number order to fill any remaining seats. Please arrive early. Standby tickets may be purchased or reserved with an ACTPass. If purchasing, cash is preferred. Standby tickets are not guaranteed.