ACT’s Artistic Director, John Langs, regarding Lauren Weedman; “Lauren is a creative maniac. It is impossible not to be inspired when you are in the room with her. As we move toward this opening night and the show finds its final form, I find myself addicted to the rehearsal room where longtime director and collaborator Allison Narver and Lauren continue to crack each other up as they cut and shape and sharpen this event. It is electric, and at equal turns hilarious and heartbreaking. This show is a window into the heart and soul of a truly unique artist who is not only performing but also doing some courageous soul diving in her role as writer-creator. Working with autobiographical material is a vulnerable place to be, and my hat is off to Lauren. I truly admire her.”

With her hair bigger than ever, Lauren Weedman (and her alter ego Tammy Lisa) and her fine band are ready to take you on a journey of heartbreak, laughter and fresh starts. “While the plot of the show centers on the issues of being betrayed and getting divorced, the themes are applicable to most anyone, for example, discovering who you really are, or finding yourself alone, or perhaps realizing that you’re not who you thought you were. This universality is what makes Lauren Weedman’s brand of comedy / performance so funny and so emotional. Whoever you are and whatever your life has been like, I’m betting you’ll find something in this show that hits close to home.” – Broadway World 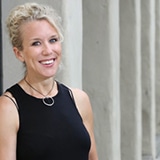 Lauren Weedman (Writer and Performer) is an award-winning comedic actress, playwright and author. Her first show, Homecoming, began as a 15-minute performance art piece at Seattle’s On the Boards and went on to an Off-Broadway production in New York City, back in 2001. Bust, about her work in the Los Angeles county jail, received a MacDowell Fellowship for playwriting by the Alpert Awards, as well as several “best of the arts” across the nation. She has written and performed more than 10 solo plays, including Homecoming, Amsterdam, If Ornaments Had Lips, Huu, Rash, Wreckage, Bust, No … You Shut Up, and most recently, The People’s Republic of Portland at The Armory. Her television credits include The Daily Show, Horny Patty on HBO’s Hung, and Doris on HBO’s Looking. Her most recent films, due for release this fall, are The Little Hours starring John C. Reilly and Wilson with Woody Harrelson. Weedman is the author of two books of comedic essays, A Woman Trapped in a Woman’s Body: (Tales from a Life of Cringe) and Miss Fortune: Fresh Perspectives on Having it All From Someone Who is Not Okay. She lives in a rent-controlled apartment with her 7-year-old son, Leo.

*Members of Actors’ Equity Association, the Union of Professional Actors and Stage Managers in the United States. 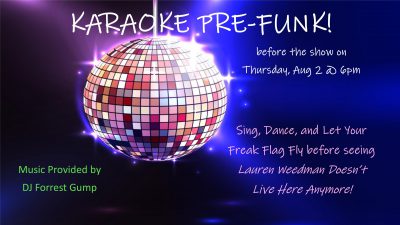 One night only… Join DJ Forrest Gump, members of Pageant the Musical, and special other guests! Croon, cry into your beer, and belt it out before seeing the evening performance of Lauren Weedman Doesn’t Live Here Anymore.
Beer, wine, and peanuts provided!

See what patrons are saying!

“She is fantastic! This was GREAT!”

“Attended this evening- loved it. She is one talented woman. Go see her.”

“Saw this last night! It was a hoot!”

“Her show was fantastic. Lauren incorporated so many different personalities, I loved it.”