presented by ACTLab and The Seagull Project

The Seagull Project will present Uncle Vanya, their fourth production in completion of Chekhov’s cannon of major plays. The production also marks the culmination of an eight-year partnership with ACT Theatre’s ACTLab program. This partnership produced Chekhov’s The Seagull (2011), The Three Sisters (2013), and The Cherry Orchard (2015).

Uncle Vanya, the second major play written by Chekhov, was first popular in the Russian provinces before premiering at the Moscow Art Theatre in 1898. This emotionally vast satire zooms in on a provincial family in turmoil, opening after the esteemed Professor Serebryakov and his wife, Yelena, arrive to stay at the family estate after coming to the end of their fiscal rope. The desires of the family, including Uncle Vanya, Sonya, Dr. Astrov, and the rest of the estate, begin to boil under these new circumstances, culminating in Chekhov’s most iconic scene.

John Langs, ACT’s Artistic Director and Resident Director for The Seagull Project says of Uncle Vanya, “No playwright captures the messy, complex, often humorous plight of humanity with such care and compassion as Chekhov, and no playwright shows so little mercy for their characters. This play is about the individual, a journey of personal discovery steeped in memory, all through the eyes of Uncle Vanya. It is an investigation of what happens when the life purpose of these characters is undermined, and societal systems have failed them. I am thrilled to be bringing this final Chekhov story to the ACTLab stage in celebration of ACT’s treasured partnership with The Seagull Project.”

Please be advised, this production includes the use of gunshots and references to suicidality and suicide. 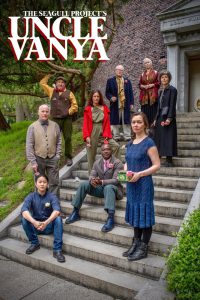 The Seagull Project was formed out of a passion for the works of Anton Chekhov, particularly his play, The Seagull. Having met and ccollaborated on Seattle Shakespeare Company’s wildly successful The Threepenny Opera, the founding producers — Brandon J. Simmons, Julie Briskman, John Bogar, and Alex Tavares  —  set about creating a new collaboration, one formed around a long-form, actor-driven workshop of Chekhov’s play. They began assembling an ensemble in 2011 and finally completed their cast in spring of 2012. They began meeting regularly at the University of Washington and later at Seattle Children’s Theatre for weekly sessions in which they trained physically and began to revisit the fundamentals of their craft as actors. 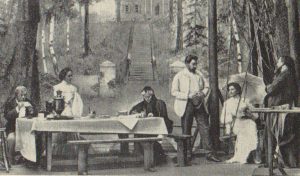 Originally written as The Wood Demon in 1889, Uncle Vanya underwent heavy revisions in the summer of 1896, as The Seagull was opening in St. Petersburg. Chekhov reduced the length of the play by almost one-third, cut the cast down from thirteen to eight, brought a much fuller ensemble balance to the piece, and most notedly changing the suicide of Uncle George to the erratic shooting of the third act. This changed the piece significantly, from what was considered Chekhov’s “romantic comedy” to one of the masterpieces of tragicomedy.

Set on the Voynitsky family estate, Uncle Vanya follows the lives of the family and friends over a three month period one summer. Vanya, has spent his adult life managing the family estate with his niece Sonya, supporting his aging mother, and dutifully copying the manuscripts of his brother-in-law, Professor Serebryakov, whose first wife was Vanya’s late sister and Sonya’s mother. The professor arrives for a visit with his new wife, Yelena. Vanya, who despises his brother-in-law, falls irrationally in love with her. During the course of the play a series of love entanglements develop involving Vanya, Yelena, Sonya, and Astrov; a country doctor and Vanya’s closest friend, whom Sonya loves deeply. When the professor suddenly announces his intentions to sell the estate, a horrified Vanya is finally provoked into action. He attempts to shoot the Professor twice, and misses both times. He then attempts to overdose and fails at that too. In the end, the Professor and his wife leave, and Vanya and Sonya are left, as before, to live out the rest of their days.

The play, like Chekhov’s other mature dramas, functions without any kind of typical Aristotelian plot, instead Chekhov dramatizes his deep perception of human behavior. “Characters don’t shoot themselves on stage, like Ivanov. Instead they endure, as Nina says, or work, Sonya says. Vanya alive, facing the truth of his wasted life day after day is more truthful and more tragic, in Chekhov’s view, then Vanya dead. There is no major theme, but rather a focus on love, country, life, nature, power, displacement, and the passage of time” (Rocamora).

The play first toured the provinces in 1898, before being offered to be produced by the Maly, which was the most prestigious theatre in all of Russia. However, due to a series of miscommunications and desired cuts by a government literary and censorship committee, Chekhov decided to go with the Moscow Art Theatre, which was not an imperial theatre, and therefore not liable to censors. Uncle Vanya opened on October 26th, 1899, to initially mixed reviews due to the pacing, but found critical success in the nights to come.

Age & Content Considerations: This production includes the use of gunshots and references to suicidality and suicide.

“In life, one does not shoot oneself in the head, hang oneself, or declare one’s passion at every fencepost, and one does not pour out profound thoughts in a constant flow. No, mostly one eats, drinks, flirts, makes stupid remarks: that is what should be seen on stage. One must write plays in which people come and go, have dinner, talk about the rain and the sunshine, play cards – not because this is the author’s whim but because this is what happens in real life… Nothing must be fitted into a pattern.” – Chekhov