The latest work by award winning playwright, performer and Pulitzer Prize finalist Dael Orlandersmith focuses on the social unrest following the fatal police shooting of unarmed black teenager Michael Brown in Ferguson, Missouri. The playwright crafted a one-act drama that focuses on eight composite characters from the St. Louis region, examining the issues of race and social unrest from a variety of perspectives. Orlandersmith’s drama is even-keeled and balanced in its approach to the nation’s festering problem of race relations that goes back 400 years. This one-woman show is certain to generate conversations about who we’ve been, who we are and who we will become. 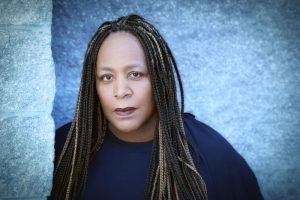 Daeld Orlandersmith previously performed Yellowman at ACT in 2002. Yellowman was commissioned by and premiered at McCarter Theatre in a co-production with The Wilma Theater and Long Wharf Theatre. Orlandersmith was a Pulitzer Prize finalist and Drama Desk Award nominee for Outstanding Play and Outstanding Actress in a Play for Yellowman in 2002. The Blue Album, in collaboration with David Cale, premiered at Long Wharf Theatre in 2007. Stoop Stories was first performed in 2008 at The Public Theater’s Under the Radar Festival and Apollo Theater’s Salon Series; Washington, DC’s Studio Theatre produced its world premiere in 2009. Bones was commissioned by the Mark Taper Forum where it premiered in 2010. Black N’ Blue Boys/Broken Men was developed as a co-commission between the Goodman and Berkeley Repertory Theatre, where it was staged in May 2012. Orlandersmith wrote and performed a solo memoir play called Forever, at the Kirk Douglas Theatre in Los Angeles in 2014, at the Long Wharf and New York Theatre Workshop in 2015, and at Portland Center Stage in 2016.Forever at the Abbey Theatre in Dublin in July 2017. In Fall of 2016, Orlandersmith wrote and performed Until the Flood, which was commissioned by St Louis Rep. In 2018, it will be produced at Rattlestick Playwrights Theater in New York, Milwaukee Rep, Goodman Theater, and ACT Seattle. Orlandersmith has toured extensively with the Nuyorican Poets Café (Real Live Poetry) throughout the United States, Europe and Australia. Yellowman and a collection of her earlier works have been published by Vintage Books and Dramatists Play Service. Orlandersmith attended Sundance Institute Theatre Lab for four summers and is the recipient of a New York Foundation for the Arts Grant, The Helen Merrill Award for Emerging Playwrights, a Guggenheim and the 2005 PEN/Laura Pels Foundation Award for a playwright in mid-career. She is the recipient of a Lucille Lortel Foundation Playwrights Fellowship and an Obie Award for Beauty’s Daughter. Orlandersmith is currently working on two commissions.

Jun 12
Behind the Scenes with Classical King FM

Learn more about Until the Flood:
Feature from American Theatre (Feb 6, 2017)

Until the Flood contains coarse language and mature content, including descriptions of gun violence, racism, police relations, and race relations.

“A poetic plea for understanding and peace”

“Dazzling… mesmerizing piece of theatre that I consider required viewing!”

“Both Eye-Opening and Quietly Moving”